25th Anniversary of the Interparliamentary Assembly on Orthodoxy (IAO) 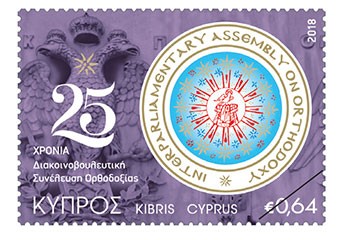 25th Anniversary of the Interparliamentary Assembly on Orthodoxy (IAO)

Established in 1993, the Interparliamentary Assembly on Orthodoxy (IAO) is a political organisation with its International Secretariat based at the Hellenic Parliament in Athens. It consists of parliamentary delegations from 25 countries including Cyprus which is a founding member. The object of the IAO is to develop a multilevel political and cultural activity, encourage contacts and achieve broader relations between participating parliaments, as well as to promote the understanding of modern political phenomena and social trends and enhance the elements of Orthodoxy which favourably affect mutual understanding between cultures, peoples and States. This year, the IAO celebrates 25 years of creative parliamentary presence on the international stage and within the framework of the anniversary celebrations a remembrance stamp has been issued by the Cyprus Post upon a proposal of the House of Representatives.