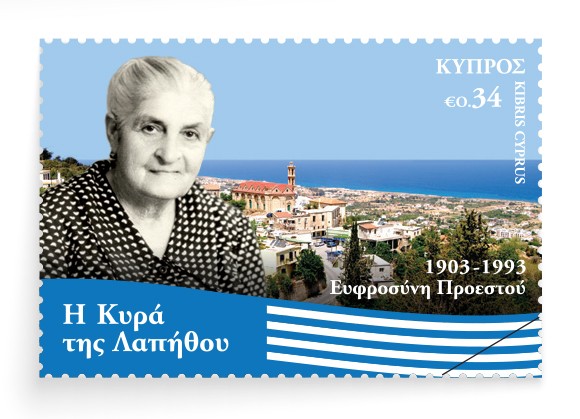 Heroic figure of occupied Lapithos. She was a midwife in Lapithos and the surrounding Greek Cypriot and Turkish Cypriot villages.

He was a charismatic personality with a kind look, determination, readiness, will, humanism and great patriotism.

Her national contribution is due to the fact that, after the occupation of Lapithos by the Turkish invaders, on 06 August 1974, as a real mother, she selflessly supplied food and protected, at the risk of her life, a group of twelve soldiers trapped in Lapithos, in a cave (burrow) near her house.

The Turks realized her action and arrested her. She was horribly tortured and humiliated, dragging her half-naked in the streets of Lapithos. She, however, with incomparable bravery and with her great Greek soul, endured all the tortures, stood up and did not betray the twelve young men. The Turks sent her to the firing squad, but at the last moment she was recognized by a Turkish Cypriot officer, who recognised her as the woman who helped his mother give birth to him!

She was imprisoned in the Keryneia Castle and then taken back to Lapithos, from where she was finally released eight months later.

She lived in Nicosia with her children and was hosted by the twelve young men she protected until the day of her death, on 17 April 1993.