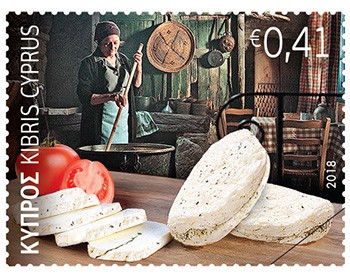 Halloumi (fresh or mature) is the Cypriot cheese, made from sheep's or goat's milk or a mixture of the two previous with or without cow's milk.

A lot of reports have testified to the production of Halloumi in Cyprus since ancient times. Venice Doge Leonardo Dona, who lived in Cyprus for two years 1556 - 1558 AC, in one of his manuscripts makes reference to this Cypriot product by attributing it as "calumi". There are also many other references to Halloumi, including that of Archimandrite Kyprianou in 1788 AC.

The characteristics of Halloumi, and in particular its ability not to melt at high temperatures, allow it to be consumed in a variety of ways. Thus, food enthusiasts can enjoy it both grilled or fried as well as a component of pasta or soup (such as trachanas). Halloumi holds a special position in the Cypriot consumer's diet, but is also the first exported agricultural product of Cyprus. It should be stressed that Halloumi, as a Cypriot product, is already protected in several countries through registered trademarks. An application has already been submitted to the European Commission, from Cyprus, for registration of the name Halloumi/Hellim in the European Register as a Protected Designation of Origin (PDO).