Glafkos Clerides was the 4th President of the Republic of Cyprus. During his ten-year term of office (1993 – 2003) Cyprus achieved the completion of the accession negotiations with the EU, the harmonisation with the Acquis Communautaire and a great deal of reforms and significant projects.

Glafkos Clerides was born 100 years ago, on 24 April 1919. In 1936 he was expelled from the Pangyprion Gymnasium for being strongly in favour of Demotic Greek. He left school and continued his secondary education in London and then he studied law.

During World War II he voluntarily served in the British Royal Air Force. In 1942 his plane was shot down by the Nazi and he remained a prisoner of war for 3 years.

When he came back to Cyprus he practiced law and participated in the EOKA struggle for the liberation of the island.

Clerides participated in the 1959 London Conference on Cyprus and during the transitional period 1959–1960, he served as Minister of Justice. In the first Presidential Elections, he backed Archbishop Makarios III even though the other candidate was his father, Ioannis Clerides.

During the critical period after the Turkish invasion, he became acting President of the Republic until the return of Archbishop Makarios. For his work he received a commendation from the then President of the House of Representatives.

In 1976 he founded the Democratic Rally (Demokratikos Synagermos) and he was being elected MP since 1981. In 1993 he was elected President of the Republic.

You can purchase the series as well as other philatelic products from our e-shop by pressing here. 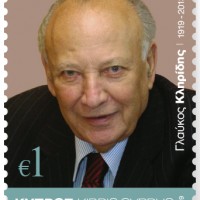